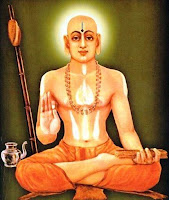 
1. The Pious people should have a liking for Sri Hari who is the controller of body and who is supreme. They should leave their ego, attachment and desire for material objects and should do their duty as a service to God.

2. Remember God while waking at Brahmamuhurtam (around 4:00 am) and when one sits after getting up. Go to toilet, brush teeth, do achamana and take bath.

Then do achamana, then recite “Apo hi shTha” and sprinkle water on the body. Repeat the process once again. This time instead of “Apo hi shTha” recite the aghamarshaNa Sukta – “rutvancha satyam cha”

4. Holding the breath immerse your head into the water and remember Sri Hari as described in aghamarshaNa sUkta. Recite purushasUkta and sprinkle water on your head.

5. After bath, wear dry cloths, do achamana, sprinkle the water on the body by reciting “Apo hi shTha”. Purify the water by reciting “sUryascha mAmanyuscha” and drink. Remember Sri Narayana who is embedded in Sun god, recite Gayatri mantra and give arghya three times.

6. Sprinkle water around you by reciting “asavAdityo brahma”, do achamana, give tarpana to Lord Narayana, wash the cloths which were kept on the eastern side.

7. Remember Sri Narayana who is told in Gayatri mantra, who is present in Sun by chanting “dhyeyah sadA” hymn. Meditate Gayatri mantra thousand or hundred or at least ten times.

8. Meditate Gayatri standing until Sun rise. After Sun rise one can sit. Do the morning sandhyavandana when stars can be seen in the sky, evening sandhyavandan when Sun is seen. Maintain silence while performing Sayam sandhya.

9. Sri Narayana is sitting in Padmasana in the solar system. He is wearing vanki on shoulder, makara kundala on the ears, crown on the head, pearl necklace on the neck, he has golden body, conch and disk on both the hands. Meditate on such Narayana.

10. After Gayatri japa meditate Narayana 8 letter mantra three times that of Gayatri. After the japa remember the devotees of Vishnu like Brahma, Indra, guardians of eight directions, other devatas, teacher and parents.

11. One should serve the God according to one's ability by remembering him, by talking about him. Acquire things for sadhana in righteous way. Take afternoon bath, worship Sri Hari according to Veda-Pancharatra-tantrasara.

13. Give the offered food to guests, then thinking of satisfied Sri Hari eat food. After taking food do achamana, chant Narayana 8 letter mantra.

16. Whatever jiva does with body, senses, mind, intelligence should be offered to Narayana.

17. In the society of Jivas which are everlasting there are two types, Kshara and Akshara. Brahma and other devotees who have the destruction of body are called Kshara. Lakshmi is called Akshara as her body is everlasting and without destruction.

18. In Vedas it is told that there is “paramAtman” one who is different from Kshara and Akshara. He is all pervading. He is wearing the whole universe and is feeding it. Even if there is destruction of this universe which is governed by Him, there is no destruction for Him.

19. Sri Hari is above Kshetra tatva and is superior to Lakshmi who represents the Akshara. That is the reason why Hari is called “Purushottama” in man made puranas and in Vedas, which are not man made.

20. One who has faith in what is told above and worships Hari as the Supreme being above all knows the essence of Vedic Scriptures.

21. This is a secret knowledge. One who knows this is a Jnanin and gets liberated.

23. One should perform every activity with love and affection for Sri Hari. “What is told here is faithful and is of purpose” – one who thinks so and follows it sincerely without any ill feeling will get liberated from this world.

24. One who does not follow above said teachings with ill feeling, know that they will go to Hell.

25. Remember Sri Vishnu always, never forget him, philosophy behind all the discipline and austerity while performing activity is to remember Him.

27. Keep always your mind in Sri Hari. Always have devotion to Sri Hari. Do every activity to get love and affection of Sri Hari. By remembering Sri Hari one can get all the fruits. One who wants liberation from material world should be always sinscier to Sri Hari.

28. All the above austerities hold good both for Gruhastas (married people) and Vanaprastas. Except Vaishvadeva, Baliharana and Dantadhamana – rest of the austerities should be performed by Brahmacharis also.

29. Like brahmacharis even sanyasis should not do vaishvadeva and baliharana. Apart from this yatis should perform deva pooja from the things collected without asking. They should take bath with “pranava 8 letter mantra”, They should give tarpana only to Vishnu.

30. For Sanyasis the five yajnas like brahma yajna, devayajna, pituryajna will not be there. They should give tarpana only to Sri Vishnu. Even the sanyasis has to perform Gayatri and other japa. Brahmacharis should think of Parusharama who is present in mukhyaprana and do the homa with samit.

31. People belonging to all the varnas and Ashramas should worship Vishnu as he is the supreme personality. Lakshmi, Brahma and other devotees should be worshiped as members of Sri Vishnu’s family.

32. One who knows Sri Hari as knower of all, ever new, regulator of universe, one who wears, having limit less attributes, one who is brighter than Sun, that Jiva will get liberated with the grace of Sri Hari.

33. He is the cause and governor of all Jivas, he is above modes of nature, he is complete, he is brighter than Sun.

34. Chaturmukha at the beginning of creation of the universe worshiped Narayana as the Supreme, Devendra who knows the Anirudha and other chaturmurthis worshiped Narayana as the supreme – I know such supreme personality Narayana. One who hears the superior qualities of ParamAtma and one who sees him through his sadhana will get liberated. There is no other way to get liberated.

35. Let Sri Hari with infinite attributes, one who is devoid of all impurities, who is above Sri Lakshmi and Brahma be satisfied with my work.

Excellent ! You are blessed to have made this translation.

Inexplainably precise account of the divine work that is simple enough to understand even by below mediocre people like me who long to derive spiritual joy.

Hare Srinivasa. I would like to know if there are any madhva satsangha in singapore. If so pls let me know.