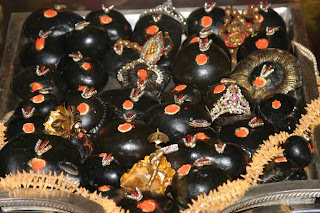 |Gµ®µ®äj|
None other than Baghawan VedaVyasa has Himself eulogized infinite
sacredness and sanctity of Shalagraama and Chakraankita which forever
harbors definite Omnipresence of every known Tirthaabhimaani Celestial,
Vedaabhimaani Celestial and those Celestials who supervise performance
of individual penance and austerity by a righteous doer of duty task, upon
Earth, Heavens and in Netherworld. Hence sacred ShalagramaTirtha occupies
highest hierarchy amongst all other genre of Holy Tirtha. The Phala of imbibing shalagrama theertha are quoted from next posts.

All those righteous doers of duty task who regular anoint their head with
sacred Holy waters so collected after performing sacrosanct ‘Abhisheka’ to
‘Shaalagrama’(sic.) are deemed to have performed Holy ritual purification
bath in every known Holy River, apart from having performed many a famed
‘Yagjna’. This showcases the immensity of infinite powers enshrined in
sacred ‘Vishnupadodaka’(sic.), which must be sprinkled upon oneself after
due meditation of Infinite Omnipresence of SarvottamaMahaVishnu.
Sacrosanct ‘Vishnupadodaka’ carries much more Infinite Sanctity than that of
Holiest of Holy waters of River Ganga abounding at the source/origin.
Merits accredited upon anointing oneself with such a ‘Vishnupadodaka’ in
infinitely more than that gained by performing sanctioned ritual
purification bath in Holy Rivers. None other than SarvottamaVaraha Offers
directed advice to His divine consort, Bhoodevi, that it is necessary to
always and at all times anoint one’s head with sacred ‘Vishnupadodaka’.
Holy waters that occurs in five fold manner such as (a) that obtained after
performing Abhisheka to ‘Shaalagrama’ in which Omnipresence of
SarvottamaShreeHari is a certainty, (b) that obtained after performing
‘Abhisheka’ to sacred 'Chakraankita' commonly available at 'Dwaraka', (c)
that obtained after being mixed with sacred tendrils of fresh
'ShreeTulasi' and (d) that obtained after simultaneous recitation of famed
[PurushaSooktaMantra] are capable to destroying five types of cardinal
sins. Therefore it is compulsory to perform ‘Abhisheka’ to Holy
‘Shaalagrama’ with sacred waters containing copious amounts of fresh
tendrils of 'ShreeTulasi', all the while reciting from famed
[PurushaSooktaMantra]. When such holiest of holy ‘Vishnupadodaka’ is
anointed upon a righteous doer of duty task then clans of ancestors dance
with unbridled liberated joy. When sacrosanct ‘Vishnupadodaka’ is anointed
upon one’s head equivalent merits of having performed ritual purification
bath in Holy Pilgrim Centers

Even those who have committed vilest of vile acts such as imbibing liquor,
eating such things that are not worthy of being eaten, repeated pleasured
communion with forbidden women and the like shall stand to be rid of
formidable sins after anointing their head with Holiest of Holy
‘Vishnupadodaka’. Amongst recognized acts of retribution and atoned regret
such as ‘Taptakruchra, Mahaakruchra, Panchagavya, Chandraayanavrata,
Sarvakruchra and Paaraka’, anointing one’s head with Holiest of Holy
‘Vishnupadodka’ is considered as being the greatest act of atonement for
having committed unspeakable sins. Even collective merits enshrined in
performance of ritual purification bath in such great Holy Rivers such as
^Ganga-Godavari^ and at the region of their confluence with the Great Sea
and every other known Holy River in this Universe, does not even qualify for
one sixteenth of merit that is so permanently enshrined in anointment of the
sacred ‘Vishnupadoka’ upon one’s head. Accumulated sins are deemed to be
washed off only after repeated performance of ritual purification bath in
such great Holy Rivers occurring at Pilgrim Centers of
^Prayag-Pushkara-Nyimishaaranya-Kurukshetra^. But even a great sinner who
has committed ‘Bramhahatya’(sic.) stands instantly abdicated of all his sins
after proper anointment of sacred ‘Vishnupadodaka’ upon his head. All those
righteous performers of duty task who regularly imbibe sacred
‘Vishnupadodaka’ shall stand to gain equivalent merits of having observed
fasting rituals so observed in twelve years at one go

Those righteous performers of duty task who are fortunate enough to imbibe
even tiny droplets of sacred ‘ShaalagraamaTirtha’ shall never again have to
imbibe their mother’s milk ever after since the same marks the end of their
birth cycle and shall stand a fair chance of gaining a choice strata of
Liberation. It is compulsory to imbibe this sacred ‘ShaalagraamaTirtha’
everyday, failing which imbibing ‘panchagavya’ even for a thousand times
would be rendered useless. Also it is necessary to regularly imbibe sacred
‘Tirtha’ so obtained after performing ‘Abhisheka’ to Holy 'Chakraankita
that abounds at 'Dwaraka', upon which true knowledge will dawn upon such
an individual. One must never wash one’s hand after imbibing sacrosanct
‘ShalagraamaTirtha’ and upon doing so shall stand to attract great sins. If
sacred ‘ShalagraamaTirtha’ is offered to an individual, the same must always
be accepted without any murmur or fuss even if one happens to be sitting,
reclining, standing or be in any place or any region. Also while receiving
sacred ‘Tirtha’ it is necessary to keep a clean piece of cloth as a buffer
in one’s left hand upon which the right hand must be placed. Fingers of
right hand must be clasped together whilst holding a tendril of
'ShreeTulasi' in the same.

While imbibing sacred ‘Tirtha’, utmost care must
be exercised to see that even the most tiniest of tiny drop is not be
dropped onto the floor, failing which the same shall attract such sin as
committing ‘Bramhahatya’. Sacred ‘ShaalagraamaTirtha’ is empowered to
negate a plethora of sins so accumulated in countless previous births. If
the same ‘Tirtha’ is dropped onto the floor then the same results in
attracting even more amounts of sins than that is eradicated. It is
necessary to sprinkle one’s head and imbibe a few sips of sacred ‘Tirtha’
regularly before conduct of bath, Aachamana, partaking sanctified food and
after finishing the same. The same then amounts of performance of hoary
‘Tirthasnaana’. It is imperative to anoint oneself with sacred ‘Tirtha’
immediately after completion of ritual purification bath. After alighting
onto River banks a righteous doer of duty task must also remember to offer
sacred ‘Tarpana’ to ruling Celestials and departed ancestors.

Imbibing sacred SarvottamaRanganathaPaadodaka which would tantamount to having performed ritual purification bath in such
great Holy Rivers such as,
Ganga-Pushkara-Narmada-Sindhu-Saraswati-
Yamuna-Godavari-Goutami-Tungabhadra
and visiting such great Holy Pilgrim centers such as
Dwaraka-Prayag-Badari-Kashi-Kanyakumari-ShreeRamasetu.