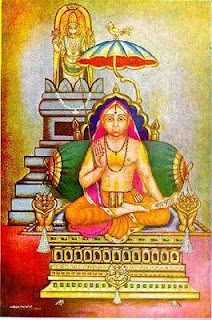 
Sri Vyasa teertha (1460 - 1539) is one of the greatest scholars of tattvavada. He has written detailed commentaries on the works of Srimad Ananda teertha and Sri Jayateertha. His works are considered to be of the highest significance, particularly because it is accepted even by his opponents that his understanding of their schools is second to none.

Sri Vyasa teertha also keeps a tempo that is hard for the less skilled to even conceive of, let alone match. His logic is exceptionally hard to beat, because of his uncanny knack of knowing exactly what the opponent is going to say, and using this information to lead the opponent on to traps of logic that are dozens of steps deep, and impossible to work through or around.

In addition to his pellucid and luminescent writings, Sri Vyasa teertha is also known for the influence he had on the Vijayanagara empire, especially for the fact that it was under his tutelage that it had its heyday, and produced its greatest ruler.

Perhaps even more importantly, it is noted that he was responsible for providing a healthy atmosphere in which the Hari-dasa tradition could sprout and flourish; he disregarded all highbrow disapprobation of the lower castes, as he showed by his acceptance of the low-caste Kanakadasa as a shishya, on par with his other students, and by his even arranging to prove to them that Kanakadasa was a greater devotee than any of them.

Sri Vyasa teertha was born in the year 1460 in Bannur which is now in the Mysuru district in the modern Karnataka state. He, his brother and sister were born as a result of the blessings of Sri Brahmanya teertha.

The young Yatiraja (the future Sri Vyasa teertha) was presented to Brahmanya teertha after he completed the comprehensive study of subjects like kavya, naTaka, alankara, and vyakaraNa.

Having been impressed with the young Yatiraja's quick mind and great aptitude for learning, Brahmanya teertha secretly meditated to ordain him into the sanyasa order. Yatiraja, though respectful of his Guru, had his doubts about receiving such deeksha, and finally consented after receiving a vision in which Vishnu Himself instructed him not to try to avert his destiny.

Study at Kanchi and Mulbagal

Shortly after Yatiraja's ordination as Sri Vyasa teertha, Sri Brahmanya teertha passed away. Sri Vyasa teertha left for Kanchi after his succession to the peeTha and spent many years there studying the six systems of philosophy, and thus gave the finishing touches to his mastery of subjects like Advaita, Vishishtadvaita, and Navya-Nyaya, in addition to tattvavada.

After Kanchi, he continued his studies at Mulbagal which was the seat of Sripadaraja and a hub for learning. There he studied Vedanta for about five to six years. Around this time, he distinguished himself at the court of Salva Narasimha at Chandragiri by winning several debates against renowned opponents.

Worship of Lord Shreenivasa at Tirupati

During this time he was entrusted the worship of Lord Srinivasa at Tirupati, a task that he performed for twelve years, from 1486-1498.

Sri Vyasa teertha left for Vijayanagara after persistent invitations by its royalty and ministers, and stayed there for the major part of the rest of his life.

Among the several debates he had at Vijayanagara, a notable one is that with Basava Bhatta of Kalinga which lasted for thirty days, before Basava Bhatta lost comprehensively.

However the 'golden period' of Sri Vyasa teertha's life started after Krishnadevaraya ascended the throne of Vijayanagara, for what were the one-and-twenty greatest years of the kingdom's history.

Sri Vyasa teertha is responsible for the continuation of the high regard and recognition earned by the system started by Srimad Ananda teertha. He has been respected by many scholars from other schools, including the likes of Appaya Dikshita, Pakshadhara Mishra, Madhusudana Saraswati, and Basava Bhatta. He is known for his warm-heartedness and sympathy even toward proponents of other systems of philosophy, while being a staunch Madhva himself.

In fact, his elucidation of the principles of Advaita and Vishishtadvaita were so outstanding that he even had pupils of these doctrines, who learnt those from him in preference to learning it from a guru in their own tradition.
Works by Sri Vyasa teertha :-

Among his nine major works, his most important ones are Nyayamruta, TarkatanDava, and Chandrika, collectively known as Vyasa-traya. In his magnum opus Nyayamruta, he justifies the philosophy of tattvavada and shows that monism is untenable on every ground, and that the reality of the world cannot be rejected, compromised, or diluted for any reason -- physical, rational, or spiritual.

The TarkatanDava is a refutation of the principles of Nyaya-Vaisheshika. Tatparya-Chandrika is a commentary on Sri Jayateertha's Tattvaprakashika and deals with the Sutra-Prasthana of tattvavada. It is, in fact, a significant contribution to the literature on the analysis of the Brahma-Sutra, because it makes an in-depth comparative study of the Bhashyas of Shankara, Ramanuja, and Ananda teertha.

The prameya shloka by Sri Vyasa Teertha lays out nine important tenets, all seemingly simple on the surface but having a world of depth, as the prameyas of Tattvavaada. These prameyas are consistent among themselves, and are complete in defining Tattvavaada; thus, they give a coherent and unique definition of the whole doctrine.

It is very characteristic of Sri Vyasa teertha to have digested the whole of the corpus of a large number of commentaries, original texts, glosses, etc., and presented a very pithy and yet easy-to-understand statement of the doctrine as presented in all of them.

In reading and analyzing the shloka that explains the prameyas, one finds a faithful echo of many of Srimad Ananda Teertha's statements. Sri Vyasa teertha compromises neither the nature nor the intensity of his master's unequivocal assertions.

His prameya-shloka is thus a faithful recap of the subjects expounded upon by the previous scholars in the tradition, and it may be asserted that a correct understanding of the shloka is equivalent to a grasp of the fundamental tenets of Tattvavaada.

The shloka that lays out the nine prameyas is :

He has composed beautiful devotional songs in Kannada, thus contributing significantly to the Dasa-sahitya. He was also the Guru of Purandaradasa and Kanakadasa, two outstanding luminaries of the Hari-dasa tradition, the former also the founder of modern Karnatik music, and is probably the greatest singer-saint in history.

He cast off his mortal body on the 8th of March, 1539. His Brindavana is at Nava-Vrundavana, which is located on an island in the Tungabhadra river, near Anegondi, very close to Hampi. Here, in the company of eight other eminent Madhva ascetics, he continues to meditate, and to bless devotees with true knowledge.

His ArAdhane is observed on Paalguna mAsa krishna paksha chaturthi

Nice Article and excellent site; I visit this often.

Please find an article on Sri VyasaRajaru at my blog @

There is another blog I maintain by the grace of Sri Hari Vayu i.e.
http://harivayustuti.wordpress.com

Please visit them both.