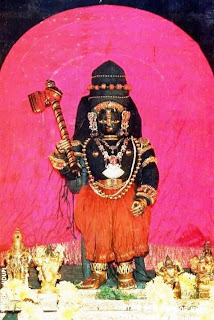 The region in between the Arabian sea and the Western Ghats stretching from in to Kanyakumari in the southern end of the peninsula is known as Parashurâma-kshetra -- the holy land of Parashurâma.

Parashurâma, an incarnation of Vishnu, appeared on this Earth to eradicate the ruling cruel kshatriya class. Parashurâma engaged in eighteen major battles and three minor ones against the kshatriyas and eliminated them all.

The proximate reason for Parashurâma's wrath was the killing of His father, the sage Jamadagni, by KârtiveeryArjuna, a kshatriya king. This killing symbolized the gross abuse of power that the kshatriya class had become used to at the time. Parashurâma Himself is shown in the Valmiki Ramayana as narrating the circumstances of the kshatriya carnage to Lord Raama (the son of Dasharatha, and another incarnation of Vishnu) as follows:

While my father (Jamadagni) was sitting in meditation, with no weapons or arms, the base-minded (Kârtivîrya) Arjuna brought about his death.

Upon hearing of his merciless killing, in retribution I killed generation after generation of kshatriyas, many times.

Having conquered the entire world, I gave away all of it to Kashyapa, the great soul, at the end of a yajnya, as an act of merit. ( Ra., Bâla Kânda, Chapter 75)

When the removal of the bestial kshatriyas had finally been accomplished, Parashurâma gifted away to Kashyapa all the lands left behind after their demise. From that time onwards new kingdoms developed under the control of saints and scholars and the responsibility of steering the nation fell into the hands of intellectuals.

With the gifting of all His lands to Kashyapa and the subsequent establishment of all these new kingdoms, Parashurâma then had to find a completely new place for Himself to live in. To this end Parashurâma ordered the king of the oceans thus: `I have to create a new land for my residence. Move away towards the West and stay as far away as my arrows go.'

Parashurâma then shot his arrows and the ocean retreated as ordered. The land thus recovered, which stretches from to Kanyakumari, is known as Parashurâma-kshetra.

The purport of this stylized stanza can be put this way:

'This Parashurâma-kshetra is our country where the Lord reigned happily by removing the blue garment of ocean waters of the Earth through his arrow-like hands.'

Krishnavadhuta, in his champu epic Mandara Maranda observes that the purpose of this incarnation was the eradication of demons.

'Bhârgava Râma, desirous of a unique creation, shot arrows towards the ocean. By the arrows of this great Bhârgava Râma, not only did the ocean retreat, but the demons hiding in the ocean were also vanquished.'

If one should visit Pajakakshetra, the birthplace of Sri Madhva, then one can see for themselves the legacy of these arrows. The whole of this place is made up of hills of granite, and from the temple on the highest hill one can look down to where one of the arrows fell. In the side of the hill there is a deep gouge in the granite which is always full of fresh, clean water.

It used to be the case that the water from this place was used exclusively in the daily rituals of the temple. The water used to be transported up the very steep hill to the temple by men whose family duty such had been for as long as can be remembered. These men had an extremely large physique that enabled them to engage in this arduous duty. There is another on these pools on another site farther away from the temple. 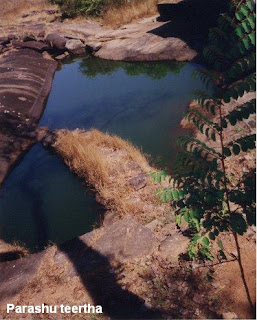 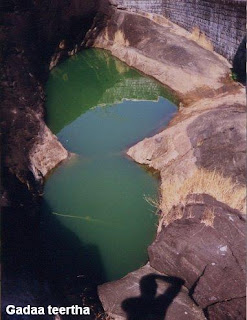 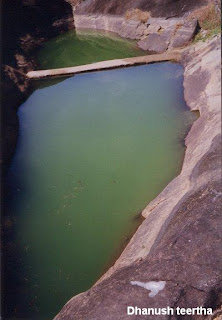 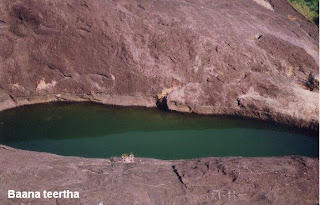 In this Parashurâma-kshetra on the of the Indian peninsula, the area lying in the Karnataka state from Kasargod to GokarNa is known as TauLava country. Râjarâjeshwara of the 14th-15th Century A.D. mentions this in his work:

'Go to one of the horns of the high peaks of Sahyadri and look down. The clouds float about. Look down further with your eyes wide open. That is the land known as Taulava country. The region spreading from Gokarna further down up to the sea is the abode of the learned people who have mastered the Vedas. This is the new creation of Parashurâma, the enemy of the kshatriya race.'